No. of Gold Moves

"Hard Times" by Paramore is a fanmade routine that is featured in Jay's channel.

Appearance of the Dancer

The dancer is a man with a black hat on his head. He wears a light powder blue shirt with a black open jacket and denim jeans. There are glowing hot pink wraps on his left arm, left lower thigh and right leg. He is also barefooted. He has a blue outline.

During the verses, circular lines appear in the dancer, which have either of the backgrounds from the beginning shown in it. In the first verse, a rip is seen that shows a white background with zigzag lines and other geometric shapes while random shapes appear in the front background. In the second verse, instead, shows two rips that feature identical backgrounds with similar elements, such as pulsing line shapes, circles and zigzags line. The only difference is that the upper is reddish brown and the elements are black and white while the lower is greenish cyan with white and yellow colors and black shadows. When the lyrics "You hit me with lightning!" is sung, lightning strikes behind the dancer briefly.

During the bridge, the background is in a starry space while cartoon objects such as planetary systems, ringed planets, planets, galaxies and UFOs zooming in.

In the outro, a rip in the center appears in white while the background undergo a section featuring various different backgrounds, inclulding the ones used in the intro. When the routine ends, the title is seen in a black background, with the coach darkened as well.

There are 4 Gold Moves in this routine:

Gold Move 1 and 3: Cross your hands forward, with your right hand below your left hand.
Gold Move 2: "Milk the giant cow", put your hands up and slightly twitch a little.
Gold Move 4: Throw your hand to your hand while lifting your left leg as you turn around. 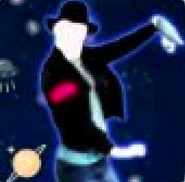 Early Version of the Background 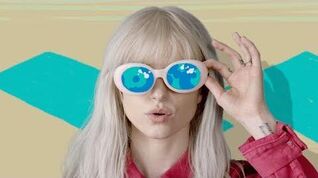 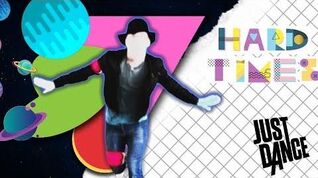